An alarming display of police prejudice in London.

Having followed and documented the multiple Black Lives Matter protests throughout London, the contrast in police response from one group of protestors to another was alarming, clearly illustrating the systemic racism that has galvanized so many behind the Black Lives Matter cause.

With nobody to protect the statues from as Black Lives Matter protests had officially been cancelled by event organizers for fear of violence that might result from the two protesting groups coming together, the true agenda of those that travelled to London on the weekend was made clear. Under the original pretext of preserving history, they viciously attacked police officers, made racists gestures, and performed nazi salutes, while also as spitting at and kicking members of the public in Hyde Park and attacking various members of the media.

On a personal level I felt genuinely threatened by the levels of hostility. More so than I think I can ever recall; as a photographer, a traveller, a stranger – ever. And I got off lightly with a few “eff off/you’s. Photographer scum. C**t. Do you want your camera smashed? Who the eff do you work for?” I saw a photographer attacked who is reported to have had his nose broken after being beaten up, a documentary duo have their camera smacked and microphone broken, another photographer be surrounded by a mob of at least 10 aggressors after taking a photo, as well as a cyclist who was pushed off his bike which was then stolen from him.

Above: Saturday June 13 – Protestors at Parliament Square clash with police.

What struck from these scenes of obvious criminal behaviour was a lack of any meaningful response from police. While the media and members of the public were attacked, they remained on the sidelines and watched, when the police themselves were attacked, they made no effort to arrest their attackers. Police officers were fly kicked in the back, were punched and kicked when they were down, had glass bottles pelted at them and had barricades thrown at them. I saw no arrests made of far-right white protestors as they brutally attacked the police and media in Parliament Square. A week earlier on the same street at Whitehall during the Black Lives Matter protests, police charged a dozen horses into a peaceful protesters outside Downing Street after a single flare that had been lit was thrown over the fence to no.10, the Prime Ministers Residence.

But while the BLM demonstrations were generally peaceful and diverse, what I witnessed in those that came to Westminster this weekend were a group of thugs intent on causing trouble and baiting police. 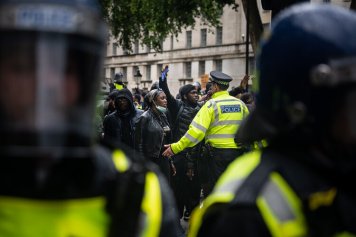 Above:Saturday June 6 – Police form a blockade on BLM protestors after mounted police rode through the crowd.

I asked an officer on his lunch break why no arrests appeared to be taking place.

“It’s a tactic we employ, instead of arresting people on scene that we might later have no evidence to charge them with, we build the evidence through the footage we obtain to then make arrests based on that evidence.”

Police saying they will “make arrests later” allows these criminals to remain on the streets, attacking and provoking people, eventually targeting Black Lives Matter demonstrators in other parts of the city (many BLM demonstrators still took to the streets despite the official cancellation).

To combat the likelihood of altercations between the far right protestors and the BLM protestors, police claimed to be ‘kettling’ people in Parliament square (blocking off exit roads), warning me as I entered through a police wall:

“You can go in, but you can’t get out without a press card.” – police officer on Victoria Street near Parliament Square. I took my chances.

A tactic to ensure everyone in Parliament Square is kept in Parliament Square to avoid them encountering anybody else on the outside. Seems viable, although porous, they didn’t effectively kettle anybody. It was actually very easy to leave Parliament Square, so the violent and drunk ‘statue protectors’ were able to roam the streets of London in search of Black Lives Matters demonstrators, leading to sporadic aggression with BLM demonstrators, who were then promptly arrested on sight by London Police.

This contradiction in police tactics from one demographic of ‘protestors’ to another raises multiple questions. Why have different policing strategies? Why allow one group of protestors who were clearly drunk and up for a fight easily leave a kettle situation to pursue their opposite numbers? Why were BLM arrested so quickly during these altercations but not the football hooligans?

Has this been a planned strategy all along in order to blame all the demonstrators as having ‘thuggish behaviour’? Was it a way of diverting public opinion away from these issues of racism that had galvanised many like we hadn’t seen before? Is this evidence of Boris Johnson’s attempt to thwart and discredit a peaceful movement asking for equality? Perhaps he’s right to feel so threatened – he’s the one with something to lose.

“The Conservative Party want a culture war because they want to distract from the central issue.” 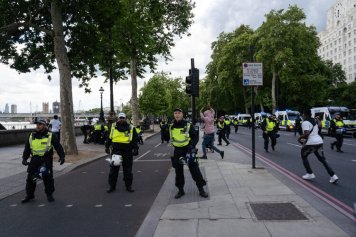 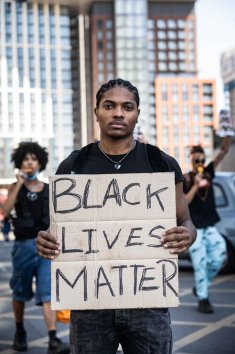 To see more of Thomas’ work you can check out his website by clicking here. You can also find him on Instagram here or on twitter here.

To find out more about the Black Lives Matter movement you can click here.